The big earthquake is the biggest canvas that Laurina Paperina has ever realized, with mixed technique, in 2017. This painting is extremely actual and, because it represents a lot of different characters (144, to be precise), it is unique and deeply attractive with a strong impact on the viewer. A wide range of figures animates the famous Californian landscape of Hollywood and Silicon Valley, interpreted by the artist in a ruinous strong decline key due to an earthquake that lacerates the landscape therefore the composing structure of the painting is divided into two asymmetric parts.

On the left side there is the Los Angeles hill with its monumental Hollywood sign, without one L. The missing letter is hold by the left hand of the Rio Christ Redeemer, geographically placed in the American atmosphere as he wears a rap style necklace, with the dollar symbol. The O is crossed by a strange and enormous subterranean creature, an enormous worm from the film Tremors. Over the solemn sign there is a completely new character, invented by the artist: the killer pigeon. This new horror character by Laurina Paperina eats human remains lying on the Hollywood hill.

Climbing down the left side of the hill there is the Silicon Valley, a rich industrial area, the US technological hub. Among its industries, Paperina represents Google and Facebook’s buildings seeming to shatter, from their windows we can see people suiciding by jumping down from high floors: it is a metaphor of the prevailing technological world that dominates our society and wins humanity.

The unique Golden Gate Bridge, broken in two parts, leads the observer to jump dangerously from the left side of the canvas to the right side, where the burning 20th Century Fox symbol is invaded by Laurina Paperina trademark big worm. In between the smashed red bridge and the degrading Hollywood logo, Ronald Mc Donald, another fundamental symbol of the American culture, has been crucified.

Many cinematographic landmarks link to the presence of the 20th Century Fox on both sides of the painting. E.T. touches with his finger the cinematographic logo, behind it there are some dinosaurs from Jurassic Park in the sky. The artist also paints the ghost from Ghostbusters with a scared expression on his face, near the entrance of the Jurassic Park (in the foreground) over the split of the ground, caused by the earthquake (inspired by the Sant Andrew’s fault), further down in the foreground we can see General Lee, the most famous car of the cinema, on its right a tribute to the Men in Black film with the representation of the state agents and the enemy aliens, in the middle, on the left, next to David Hockney A bigger splash, there are Vincent, Jules and Mr Wolf from Pulp Fiction. As in Jaws movie, the shark eats humans in the Hockney swimming pool and next to it there are the aliens from Cocoon; Pamela Anderson from the soap opera Baywatch runs to save someone on the pool’s edges while the boy sitting on the trampoline wears an halloween ghost face from the horror movie Scream. On the far left side there is the alien from the film Alien, over it the artist represents the set of Pet Sematary horror movie. Another cinematographic link is about the Terminator downsized protagonist who emerges in the recess created by Elmo’s arm (Sesame Street). It is raining frogs like in Magnolia movie and sharks swim like in Sharkando movie as they are under the sea.

In The big earthquake there are several references to the artistic world, more than in any other canvas. We can easily identify Bansky’s Love is a Riot Flower Thrower where he throws a little blue bird from Angry Birds video game, in the foreground, while we can see a detail of Peter Bruegel’s Triumph of Death painting on the edge of the split. The Smiley of Ron English, an American artist who plays with the symbols of the consumeristic culture, appears at the bottom of the Silicon Valley. On the left of the Smiley, Maurizio Cattelan becomes part of his work of art with The ninth hour, substituting Papa Giovanni Paolo II hit by a meteorite. On the same level, on the right, Paperina ironically represents Jeff Koons’ Balloon Dog, depicted in an intimate gesture. Going down we come across the smashing building of the MOCA The Museum of Contemporary Art of Los Angeles. On the left we can see the painting of Andy Mouse by Keith Haring. On the opposite side, up on the right, at the gate of Jurassic Park there is the floral face of Takashi Murakami disguised as one of his characters, further down we can find pieces of KAWS Passing Trough sculpture, while in the foreground the big pink rabbit, inspired by Tenerone (Drive In) and by Gelitin artists’ Rabbit looks a bit maniac.

The distinctive presence of the cartoons characters continues, such as Elmo from Sesame Street bigger than the other characters, Jerry from Tom and Jerry, the head of Itchy (Itchy and Scratchy), there are also Goldrake and Afrodite (Mazinga Z) robots, we can see Peter Griffin on the hill of the 20th Century Fox eating Barney from Flintstones, there is Robin Hood (1973 cartoon) coming out from the ground, down on the left, the Minions, the Teletubbies lying dead on the Route 66. On the high part of the painting there are Mr Burns from The Simpsons and Skeletor (Master of Universe – cartoon). In the middle section of the canvas there is Woody Woodpecker, character of the namesake cartoon with open arms he seems to show the whole canvas to the public. There are also different and recurring references to the comics and video games: Super Mario (video game), Spiderman (comics), Captain America (comics) and Wolverine (X-Men – comics).

The artist portraits herself like a suicide victim sitting on the cliff of the deep split created by the earthquake. 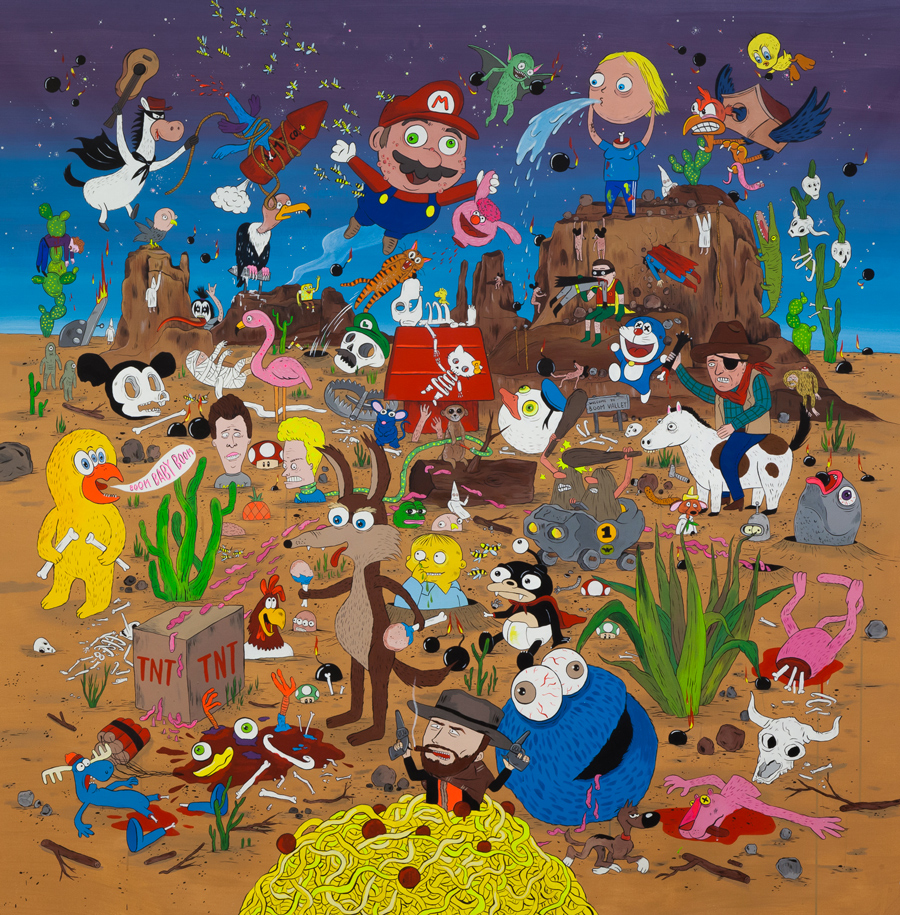 Boom Valley, a 150x150cm canvas, was made by Laurina Paperina, using a mixture of techniques, in 2017. The main theme of this work, death and destruction, just as the title suggests, represents a clear contrast with the choice of vibrant explosive colours. The desolate landscape of Boom Valley is filled with numerous characters of various sizes most of which are lifeless.

The valley’s highest rock stands out in the background with the artist’s habitual, suicidal self-portrait. In this image she represents herself in the macabre act of decapitation, trying to remove her head which is depicted as a ball full of water. The language, typical of the artist, is both graphic and figurative and, along with the use of bold colour, moderates the dramatic theme of death that the artist seems to deride. In fact, it is with extreme lightness, simplicity and a distinctive sarcastic tone that Paperina illustrates a variety of lugubrious scenes.

At the centre, next to the artist’s self-portrait, Super Mario is chased and disfigured by the stings of a swarm of bees while holding Uan’s bleeding head (a character from the 80’s tv show Bim Bum Bam) in his hand. On the left, a part of Beep Beep’s body from Road Runner is fired into the air by Rocket, a missile from the same cartoon which at the same time represents the war between Corea and the U.S.A.

On the far left of the painting, the artist Martin Creed is killed by a cactus, the recurring subject of his work. In the foreground, on the opposite side, there are two parts of the Pink Panther’s body lying on spots of red blood, near a skull with horns. In the same section, the big head of Cookie Monster from the Muppets strikes with his eyes out of the orbits while Laurina Paperina’s big worms are going out from its half-opened mouth.

Further down, on the left, there are pieces of Beep Beep that has exploded in a lake of blood and Lumpy from Happy Tree Friends cartoon with amputated legs. In the foreground, from the peak of a western spaghetti mountain emerges an intimidating Clint Eastwood, Joe with his cigar and gun as in For a fist of money movie. To revenge those who always come second, the artist represents Robin like a cannibal that eats Batman as well as Wile E. Coyote that finally can catch and eat Beep Beep like a tasty leg. As for Joe cigar and gun, Paperina honours another western style movie such as Rio Bravo, inserting the actor John Wayne riding his pony in the middle section, on the right. In the desert landscape of the Boom Valley, without vegetation, only water-retaining plants grow like cactus of different sizes, placed in a widespread way all over the surface of the canvas. Among these, there is an agave, a thorns cactus-like plant, significant for the artist’s own life.

Skulls, bones and skeletons, for example Snoopy’s ones lying on the roof of his little red house, those of Hello Kitty and the skull of Luigi from Super Mario video game are recurring characters in this work. From the arid land of Boom Valley characters like Ralph from The Simpsons (in the middle), Boccalone, a fish with a very big mouth that eats a little bomb, on the left the brunette Butt-head and the blonde Beavis, protagonists of the Nineties cartoon Beavis & Butt-head and the little Mushrooms from Super Mario video game, Bender of Futurama, Slowpoke Rodriguez, Speedy Gonzales’ protagonist, Forghorn Leghorn from Looney Tunes, the head of Cu-culo character by Laurina Paperina and a pineapple, a tribute to the artist Albert Pinya, all appear like moles emerging from the ground. Another artistic link and omen for death is represented by the skeleton of Gino de Dominicis, the artist who exposed a giant skeleton, 24 meters high at the Forte Belvedere in Florence.

At last, Paperina introduces the crocodile to symbolise the main theme of this canvas, the death: legends from many Asian countries tell that the animal is linked to the reign of the Dead, acting as a psychopomp, guiding dead souls.

End of the show is the title of the work painted by Laurina Paperina in 2017 using a combination of techniques on a 125×145 cm canvas. Big Bird from tv program Sesame Street is its central character. This figure is a symbolic representation of the artist, who metaphorically depicts her own dying body covered with wounds from which numerous cartoon characters emerge. In the artist’s typical humorous style bare pink intestines struggle to find their way out of the main cut.

The White House appears behind big birds surrounded by the main symbols of the USA: Donald Trump peering through the first window on the left, a Playboy Bunny and the Eagle (from the American coat of arms) are on the roof, further down Abraham Lincoln is being threatened by a turkey (traditional Thanksgiving Day dish).

On the top right, thus creating a counter balance, the artist depicts the three UFOs from Banksy’s work UFO Invasion which attack Duckland, the artist’s place of provenance. A ray of alien light hits the Muppet Animal gouging out his eye. The eye is one of the artist’s protagonists, often presented in her work as a flaming meteorite known as Falling Eyes (top left) or quite simply as Eyes. 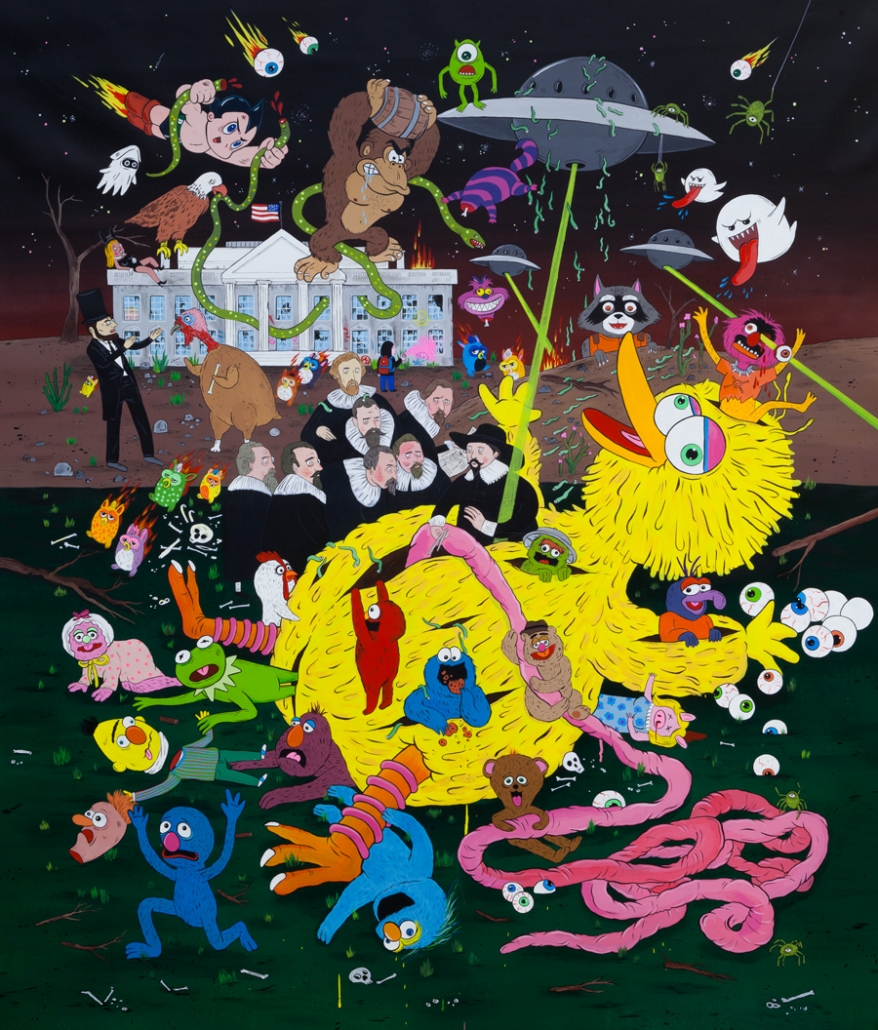