In principle, Maglionico fixes two key elements of his poetics on canvas: man and the surrounding environment, in an almost oneiric suspension, in which the multiple points of view, the wide escapes, the different focuses and the intersections of the planes make the viewer’s perception equivocal and multidirectional. Through these clues, Maglionico paints memory. Memory takes shape with his paintings. This way the simultaneous union of two or more senses – a scent, a sound – fixes the image of memory: simultaneity made up of single events that are or have been. Maglionico is demonstrative in the realization, but critical in the idea. He challenges and disapproves human perception, which is generally considered the only dispenser of some form of knowledge of the world. It supports, on the contrary, the scientific position that judges more and more actively the anthropic knowledge as deceptive and illusory.

R for Reification, A for Acausality and Study of Darkness are the three series of paintings we  encounter in the exhibition.

Reification is the body of the most recent works that are the result of the artist’s current research. Different meanings are attributed to the philosophical concept of reification, but Maglionico limits himself to delving into that aspect connected with the mental process by which what has only an abstract existence is converted into something material. In practice, past experiences are attributed to certain moments and memories by relating them to present experiences that are sharper and more defined. Reification allows to order – on a subjective time scale – the experience of the individual. However, the transitory principle we are talking about is extremely relative and separated from a precise reference system. The paintings bearing this title try to witness the process by highlighting its imperfections and contradictions, becoming the coexistent vision of a cause and an effect in an eternal present. Individuals live on the surface of the canvas, which becomes inhabited space. Everything that is painted exists, but has the capacity to alter itself because being changeable is the basis of our nature. Space – like consciousness – conceals dark areas and what emerges from Maglionico’s paintings is precisely the way in which environments are experienced: fleetingly. Life’s traces dissolve in the flow of passing time and we chase ourselves in its process of inexorable flow. The artist with his meticulous oil painting attempts to stop the moments. He questions our knowledge in order to give us the possibility to reflect and investigate new places of existence by living our habitat and our time more deeply.

Visually, in the space we meet men and women in often domestic environments and in everyday gestures: while reading a book, in the act of pouring water, while watching TV, while watching out the window, or more simply in the act of thinking. Figures are repeated, they intersect with each other and with the environment’s elements. Deprived of a real body, they move, they fluctuate. The absence of gravity becomes the essence. The spaces seem to be lived in silence. Essentially, physicality and security become perceptible thanks to Maglionico’s meticulous painting. Tradition meets a new way of seeing – and representing – things. Colours are vivid and find their greatest luminosity in the detail. Nothing is left to chance: the antique floors of the apartments in Milan, the Persian carpets, the velvet armchairs, the classic cupboard, the doors with the old-style frosted glass and the bookcases full of volumes, all reproduced in the most authentic way possible. Then, the repetition of the human presence will confuse our vision and bring us back to the artist’s poetics. Between illusion and reality. 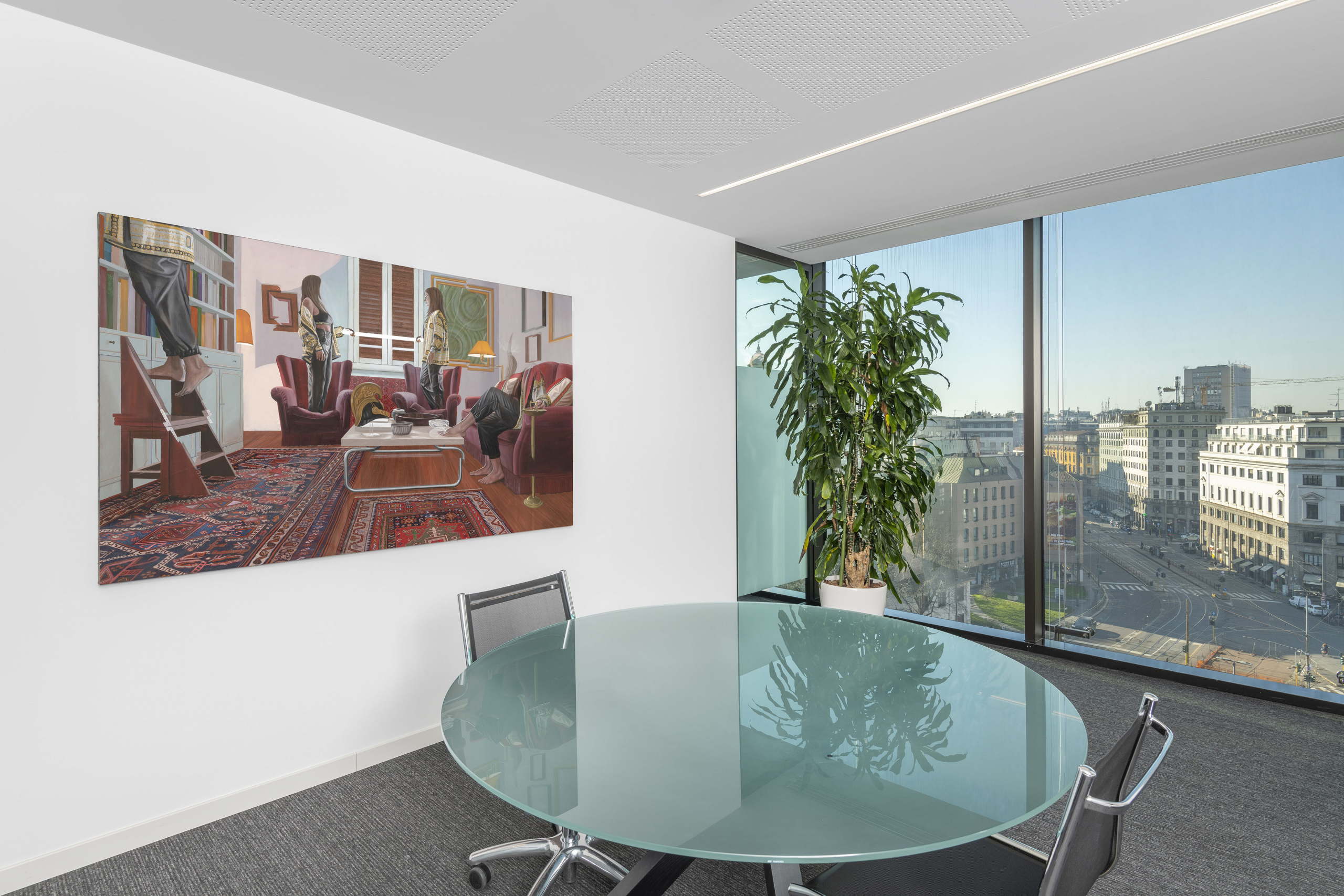 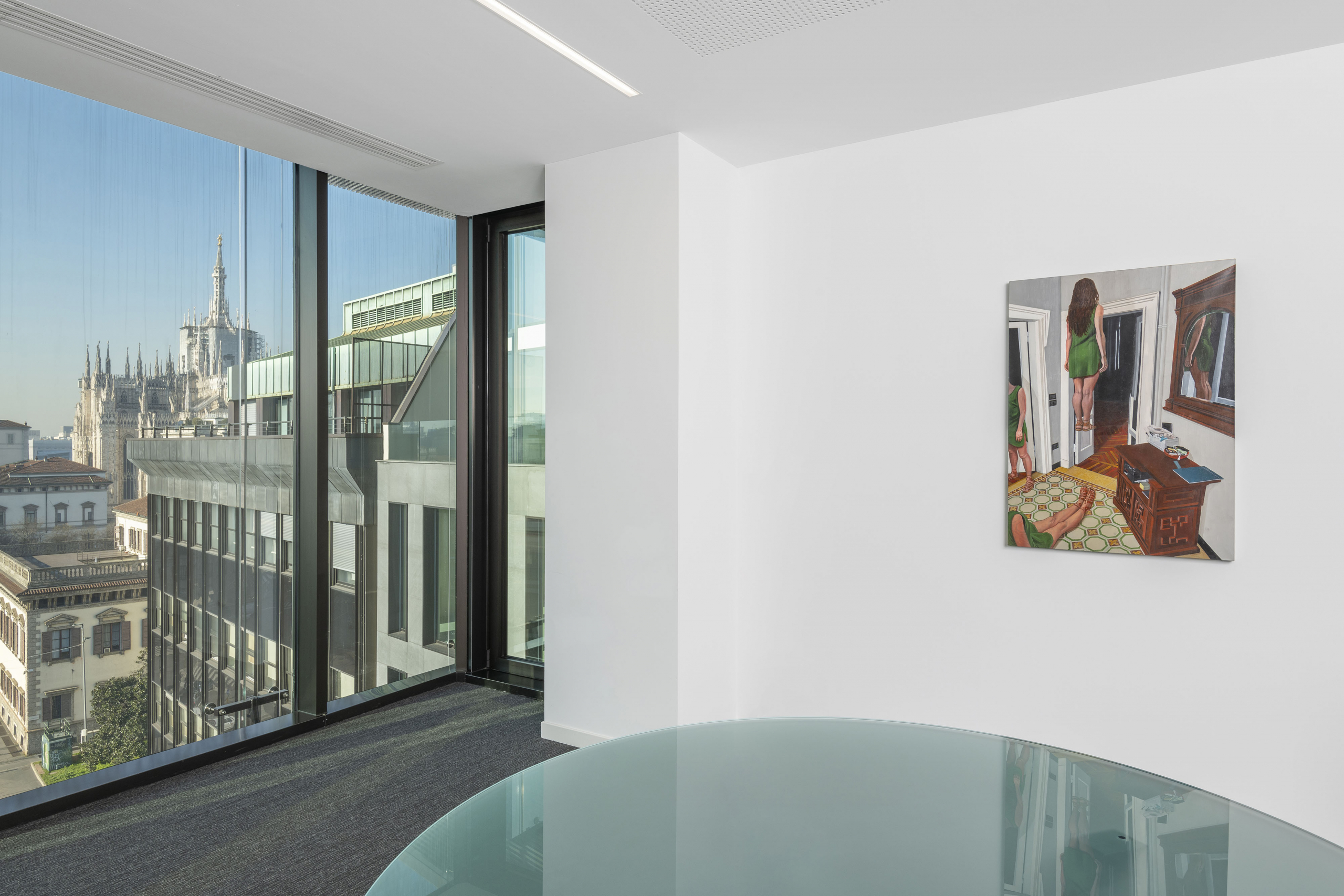 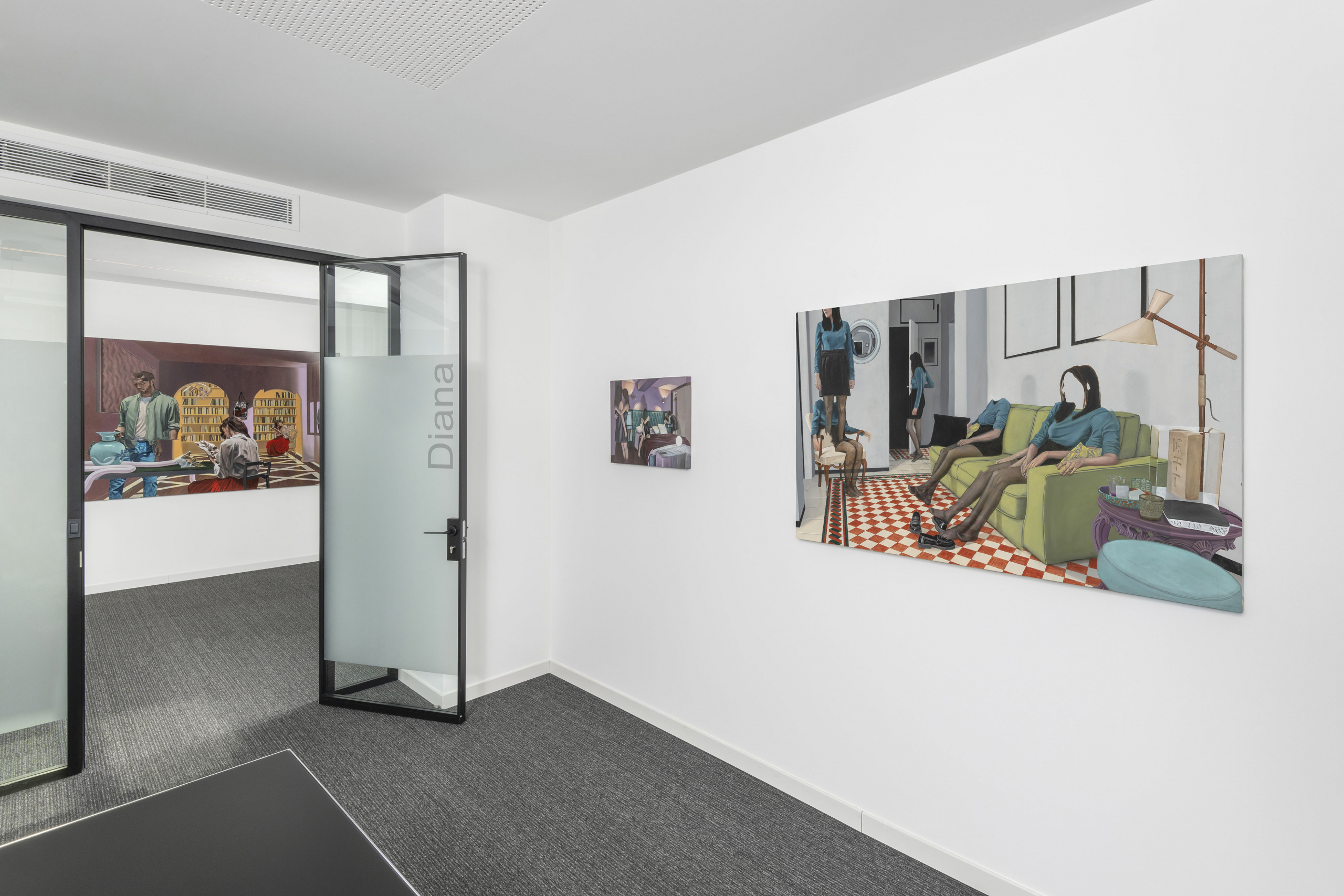 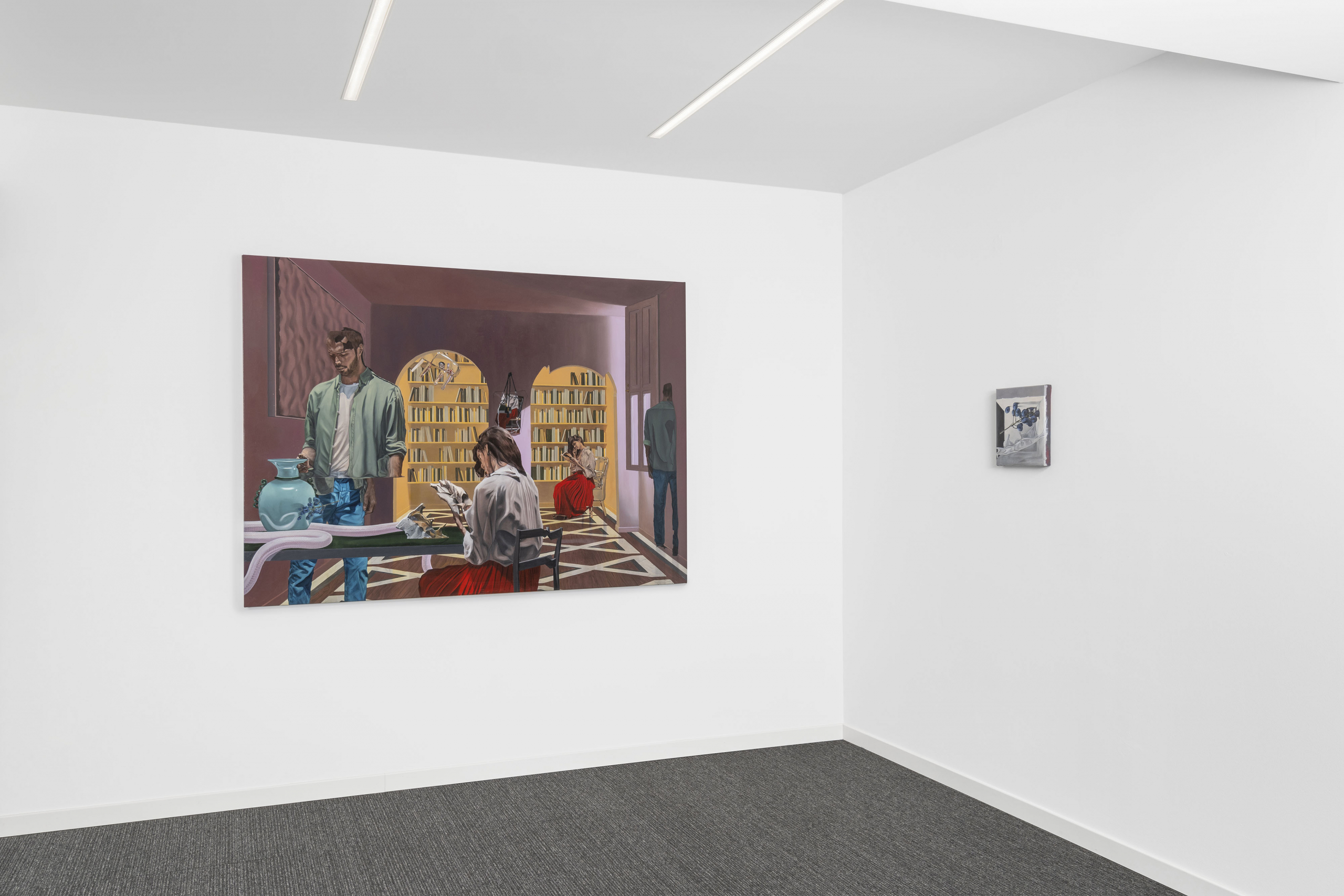 Reification, in short, encloses a cycle of works whose analysis is based only generically on the relationship between the familiar, everyday environment and man. It is later, with the series Acausality, that Maglionico adds a new, more articulated and close to the unconscious concept to his pictorial work: the synchronic revelation of an inner state. If acausality is the absence of any motivation or reason, it is important to consider that the lack of a possible explanation does not only derive from the fact that the cause may be unknown, but, simply, incomprehensible with our intellectual means. For Maglionico, this doubt arises when space and time lose their tangibility. This way, in the last year of his research, the artist analyzes the word synchronicity – which derives from the Greek roots syn (“with”) and khronos (“time”) – and focuses on attaching the theme of acausality to his work in view of a more articulated reading of the paintings. Now, with the analysis of synchronic events based on the simultaneity of two different mental states, Dario Maglionico’s interpretation is complete and exemplifying. Pictorially the environments are represented in the most recognizable style of the artist, following that artificial form typical of his work, but observing the figures – the expressions, the poses, the attitudes – it is easy to perceive the introspective thought now alive and deep. Human presences show themselves taciturn and absorbed, they are absorbed in their thoughts, perhaps worries, anxieties and fears, or perhaps simply reflecting and meditating. The lack of explanation leads us to the continuous evolution of the mind. The doubt is insistent. 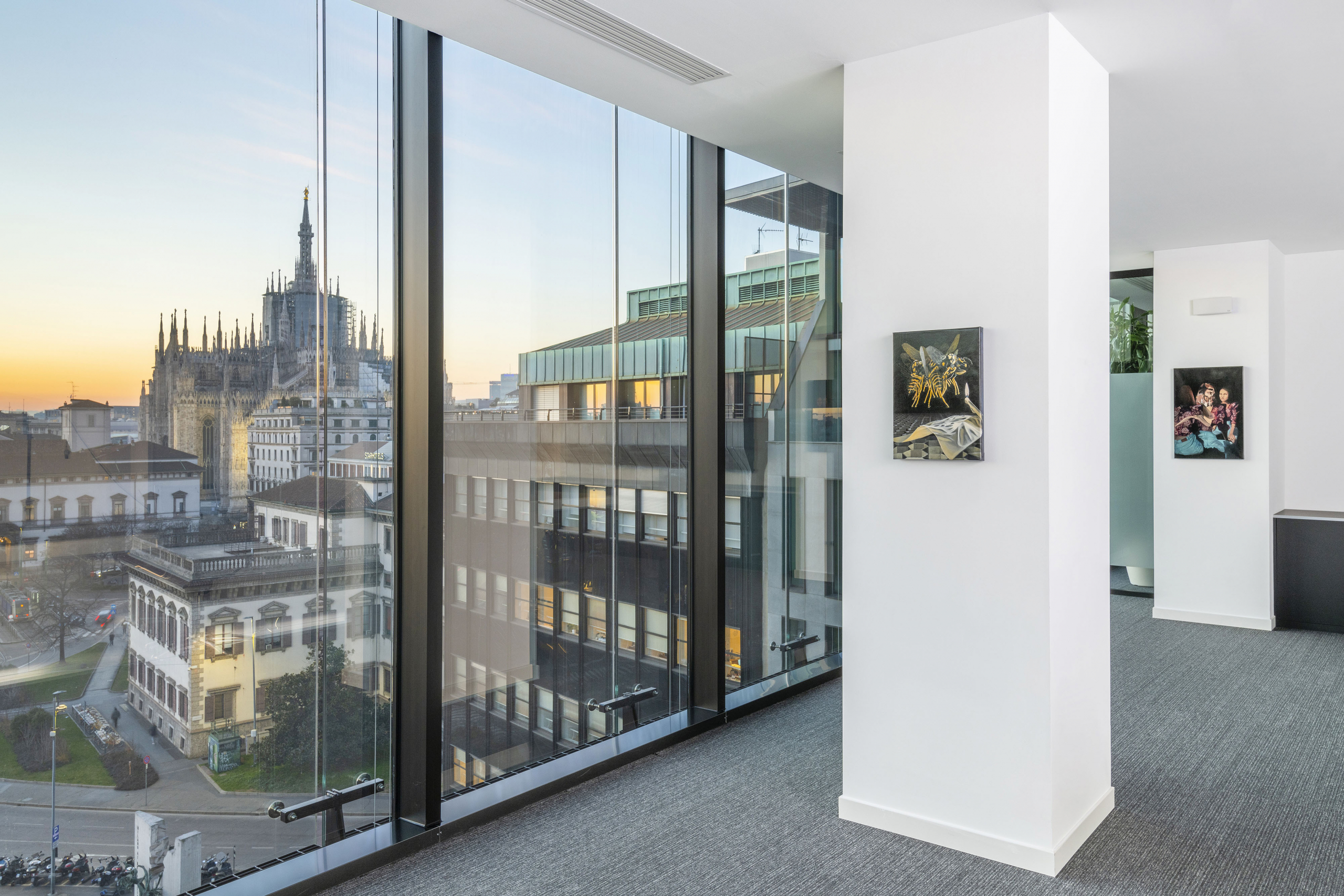 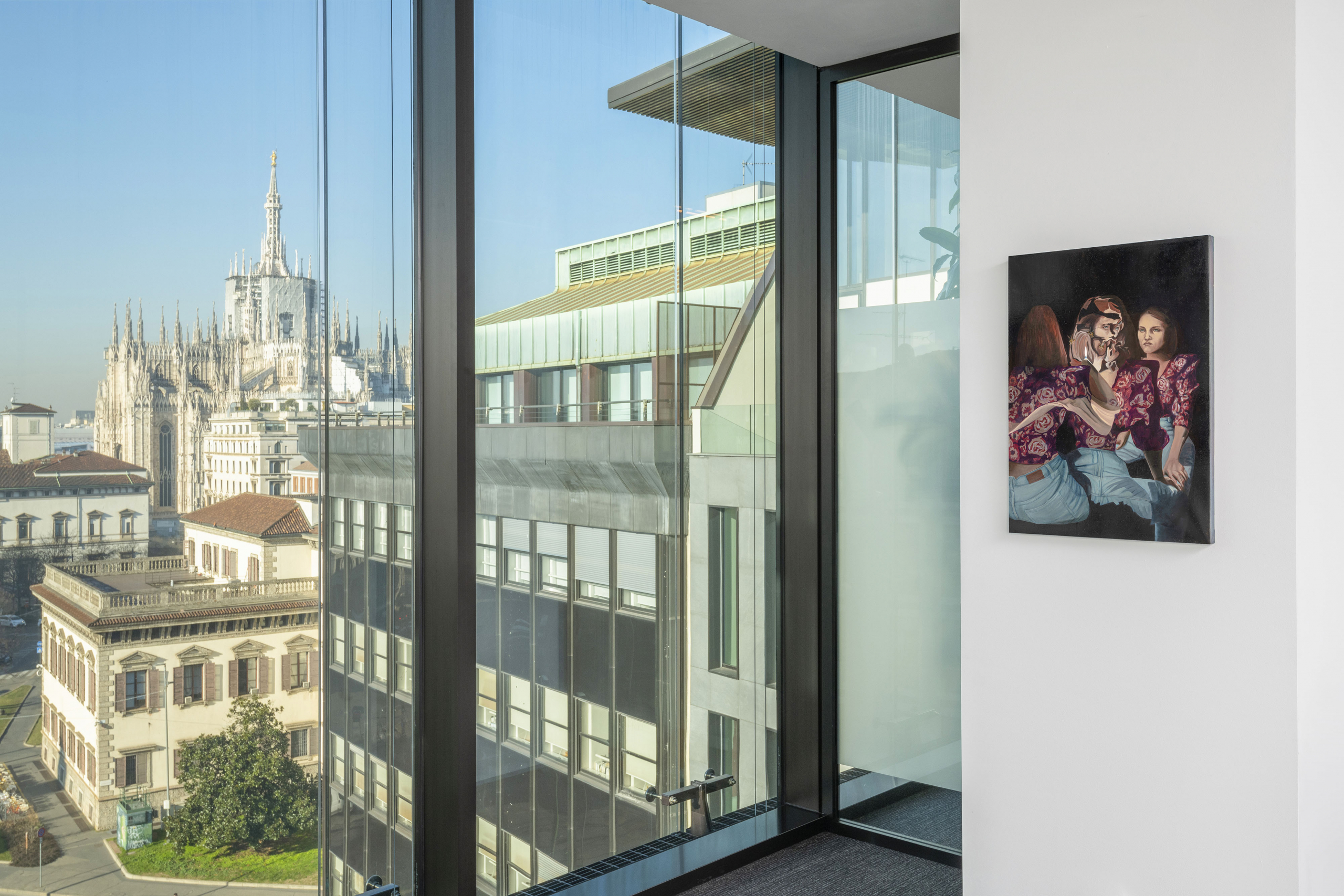 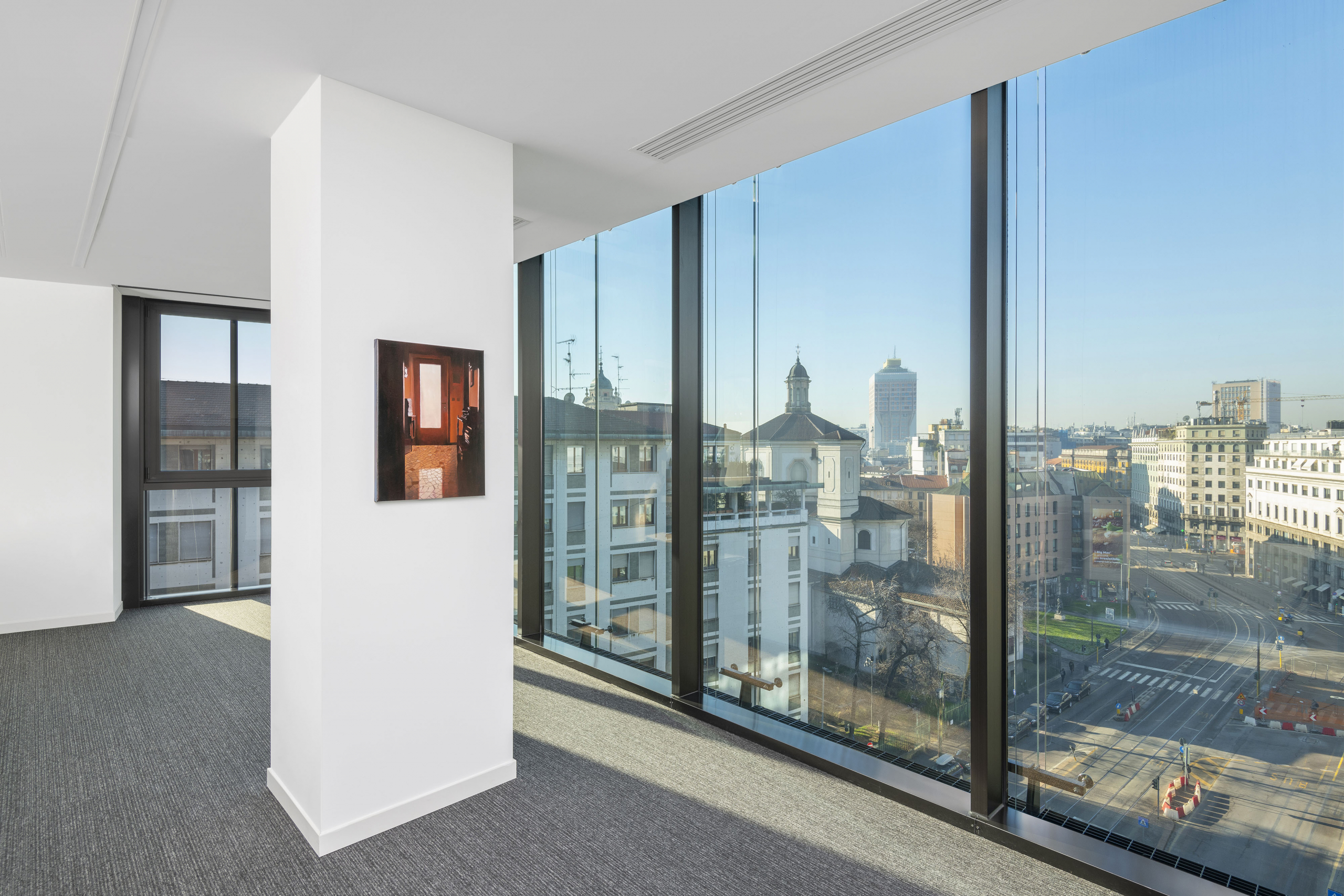 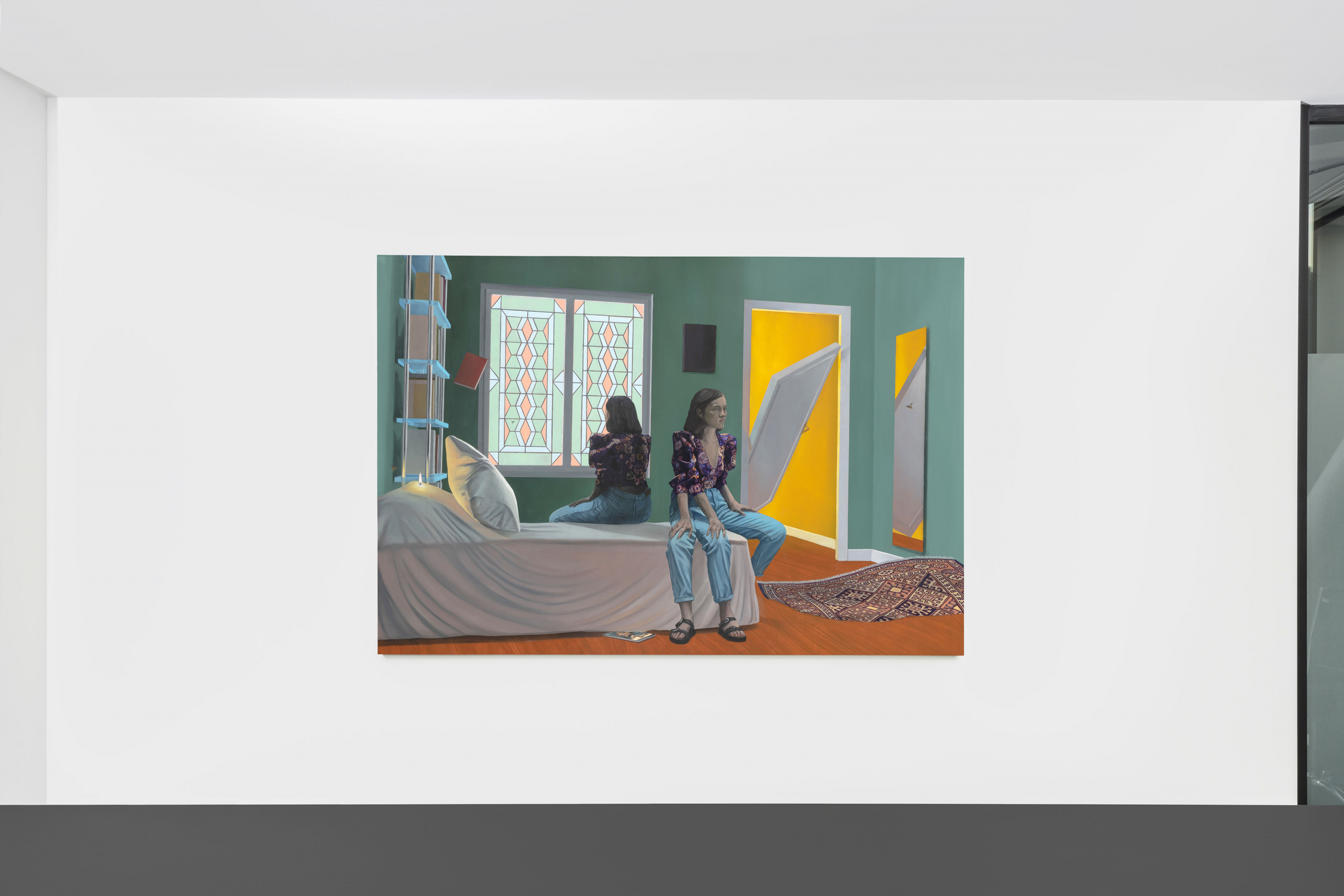 The third series, Study of Darkness, is dedicated to the perception and mental reconstruction of space through the observation of light and its infinite variation. In the dark we fall into a state of suspension and immobility. In the dark nothing exists, we wonder where we are until our eye slowly gets used to it and finds reality. A truth that is not what we are looking for, but only what exists. Darkness needs time. One begins to know the dark in order to understand it and to orient oneself. In the dark, one grasps new shapes, new colours and recreates new perspectives by learning and continuing the lines – and traces – of the old shadows. Darkness is all this and nothing.

The home – a living room or any room – becomes an exercise in investigation. Maglionico, applies the basics of traditional and academic painting – despite his engineering studies – to deepen his research between space and time. The human figure now disappears and only the secrecy of the house is the real subject. Darkness predominates on canvas, warmed by sources of light – natural or artificial – that apply their most rational and scientific formula of chiaroscuro. The light passes through the glass of a door, or through an abat-jour. It does not matter where it comes from as much as how it propagates in the dark, how it passes through the fabric of a curtain, how it penetrates the glass to reflect on the floor, how it shatters on a wall. The study of darkness is a systematic painting as a summary of an illogical and unreasonable thought.

Dario Maglionico, methodical in doing and sensitive in thinking, demonstrates with the show Esistenze sincrone how important it is to evolve and always have new points of reflection. His initial rational painting – descriptive and detailed – today reaches a much deeper expressive truth that shifts the attention from that simple corner of our house to our unconscious. 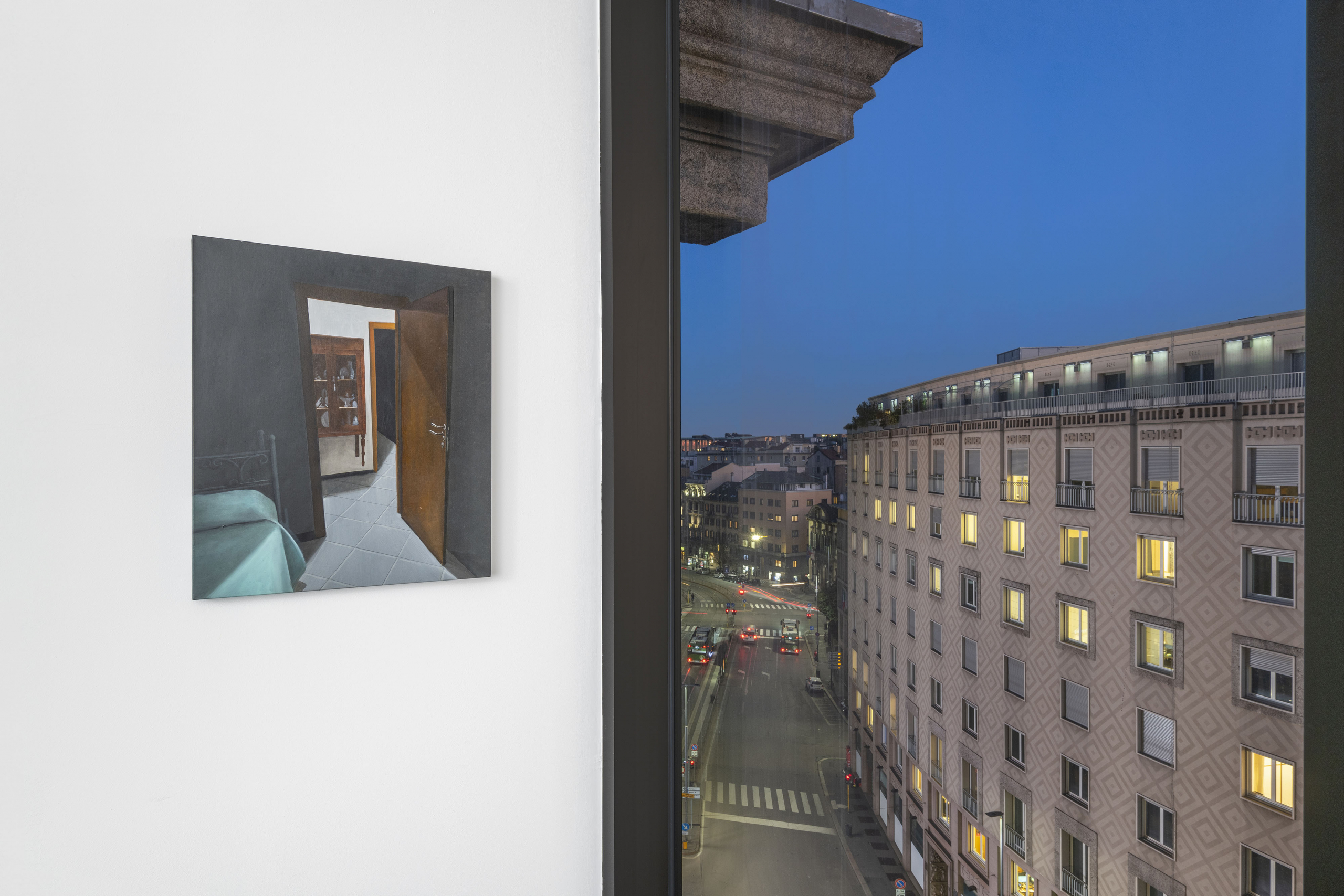 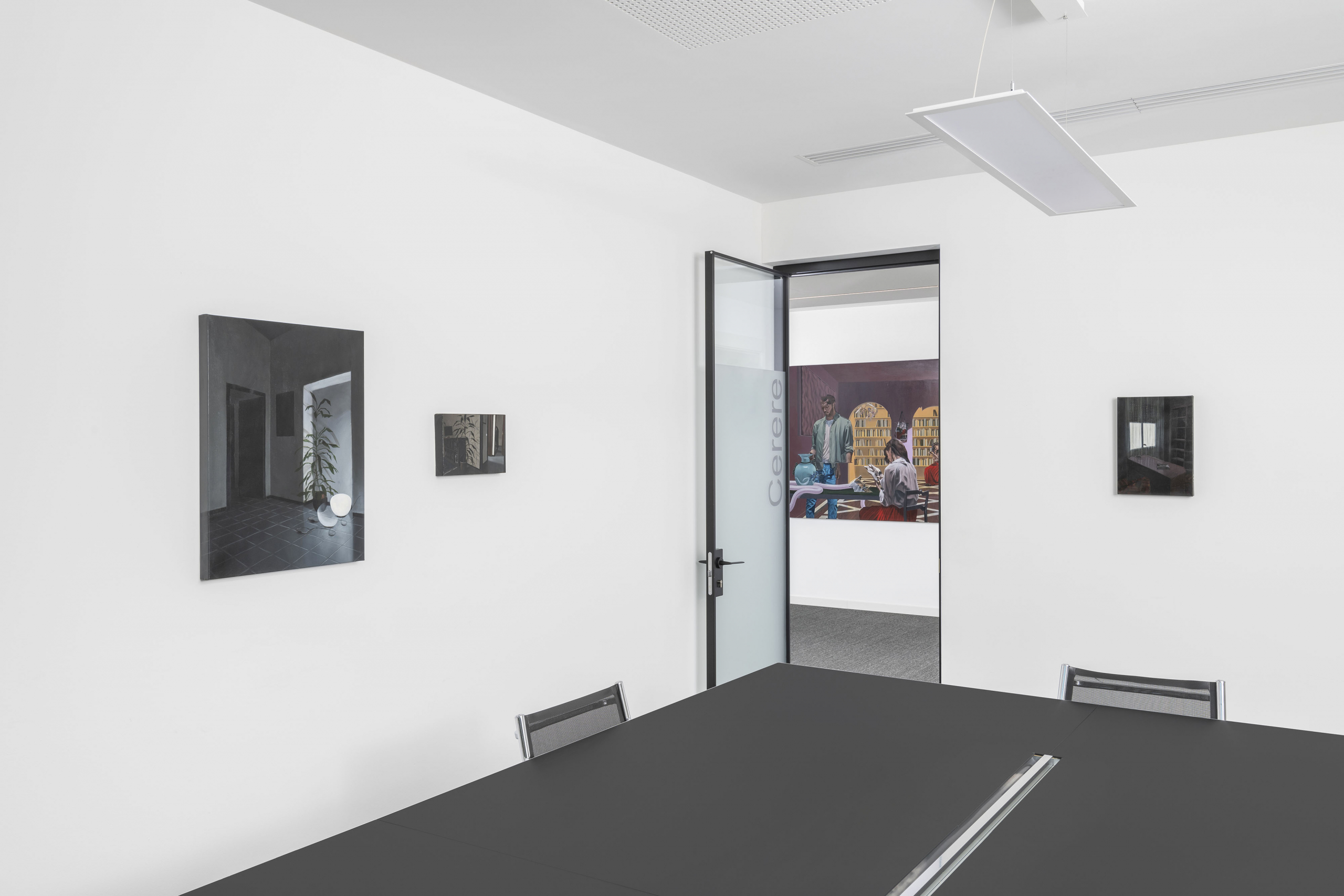 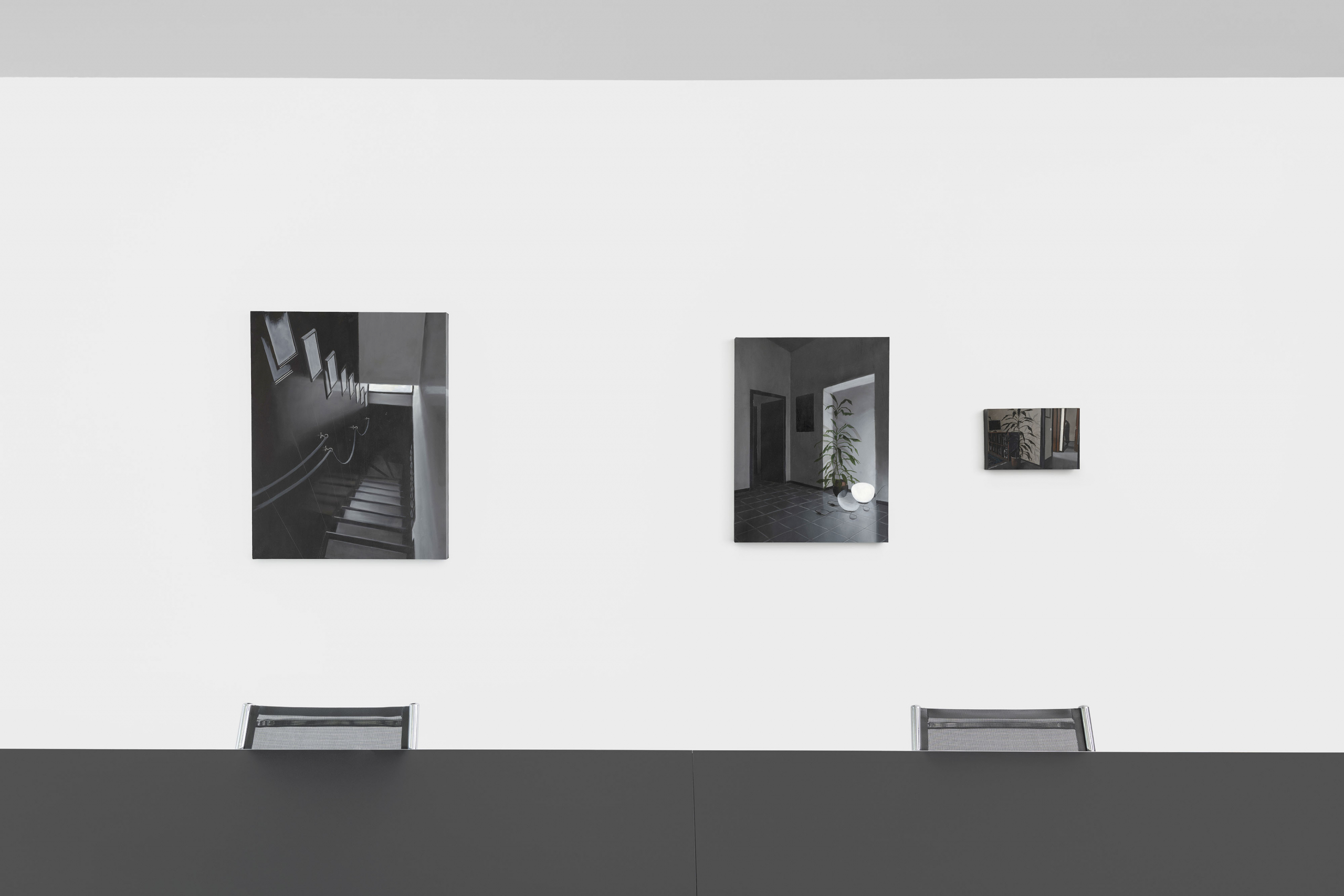