Les Simulacres is next Elisa Bertaglia‘s solo exhibition that will open next Friday, January 13, 2023, in the spaces of Martina Corbetta Gallery in Giussano, Monza Brianza. Three years later the project Singing over the Bones, the artist presents a brand new coherent and substantial research. Quoting the concept of simulacrum, Les Simulacres – image, semblance, ghost, illusion – summarizes the common theme that unites the body of works created over the last two years between the United States and Italy.

The symbols and the metaphorical language have always been the basis of Elisa Bertaglia‘s artistic research, but the idea of the emblem as a semantic threshold has recently become the center of her work.

The exhibition – made up of drawings on paper and oil paintings on canvas and aluminum – testifies the growth of the artist that shows today a diversified repertoire of images and allegories, even though her style is still recognizable by poetics and technique.

Schwarzeide—quoting Luc Tuymans is the central piece of the exhibition. As openly expressed in its title, it alludes to the homonymous oil painting on canvas by the Belgian artist Luc Tuymans. Tuymans’ work refers to the drawings of prisoners in concentration camp during the Second World War. The drawings were secretly sketched and then divided into strips distributed among the inmates with the hope of being able to recompose the whole image once freed. Thus, the painting created by Elisa Bertaglia – a big dimensions diptych (140×240 cm) – recalls step by step the pictorial gestures and forms of Tuymans’ work. But at the same time Bertaglia reinvents the scenario in the background, meticulously drawn in charcoal and graphite. If in his work Tuymans chose to leave an ’empty’ background, spreading only an icy light against which the trees and grates in the foreground stand out clearly, Elisa Bertaglia, antithetically, chooses to reinvent an imaginary and dichotomous landscape. A thin tangle of grass, leaves and branches densely populates the wings of the representation. The emptiness of the images and memory is filled by an ethereal barrier of shrubs, without root or top, which closes off the viewer’s view and imagination. 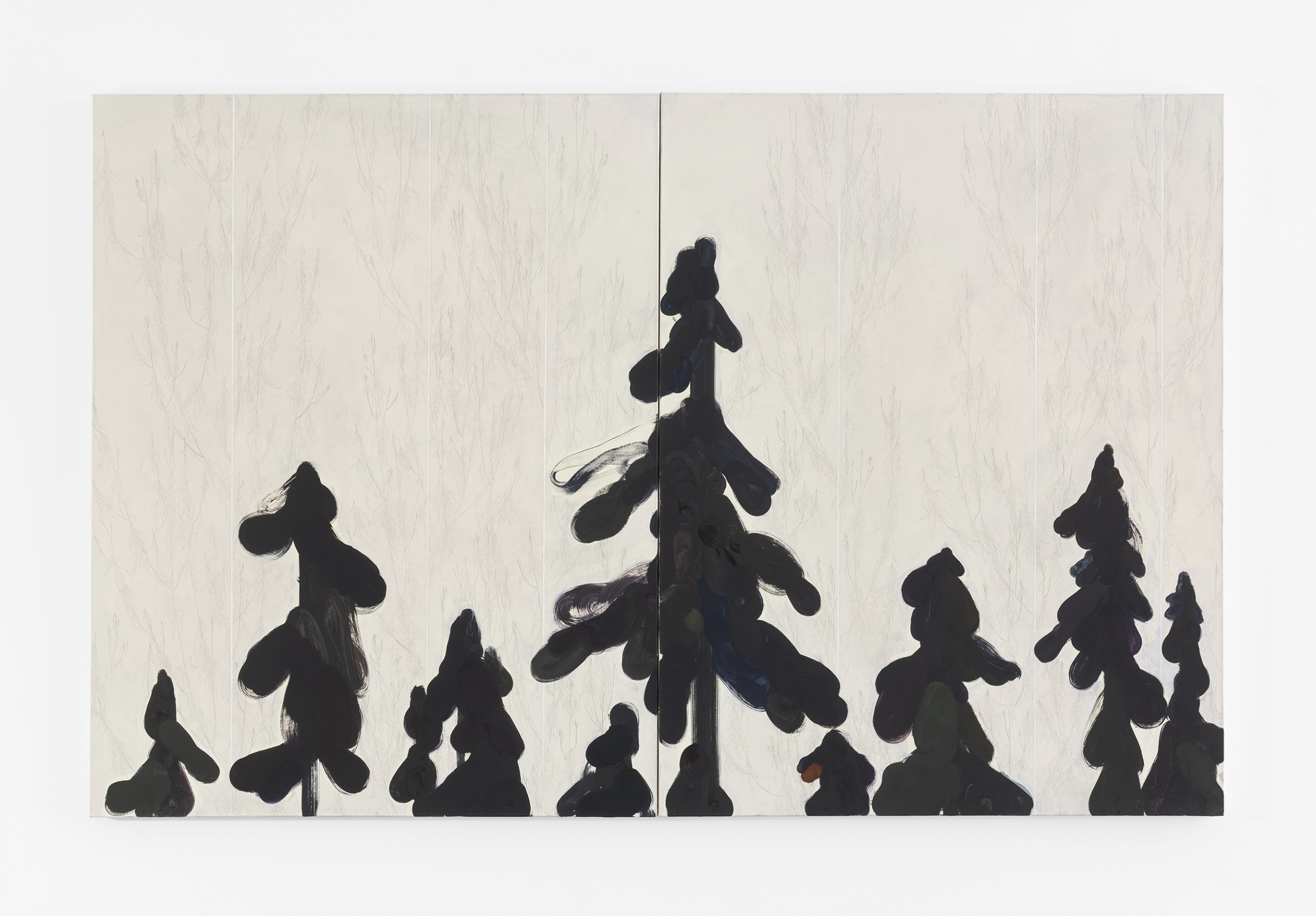 In dialogue with the other works on display, a group of small skulls paintings catches the viewer’s attention. The skull is universally recognized as a symbol for the threshold between life and death. The remains become an element in the artist’s narration. Bertaglia strongly wanted to introduce the skull as iconic element in the development of her research. Both from a technical and conceptual or philosophical point of view, her research has now become essential and complex, free from figurative constraints and eclectic. Previously in her exhibition Concerto. Singing over the Bones, curated by Rosella Farinotti in 2019, the research of new materials and supports had brought the artist to an excellent level of experimentation. Today this crucial aspect has evolved Bertaglia‘s research into the small paintings on copper and aluminum from which the exhibition takes its title. If the theme of the skull is central in the Danse Macabre works, the skeleton is the leader character in the works Les Simulacres – direct quote of the engravings by Holbein, recently exhibited at the Morgan Library in New York.

The other small and medium-sized works presented in the exhibition demonstrate a constant dialogue with artists from modern or contemporary art history. To these artists Elisa Bertaglia declares a debt of inspiration and esteem: the small diptych of vellum papers and the large abstract painting refer to two artists fundamental to Bertaglia‘s research: Agnes Martin and Liz Deschenes. 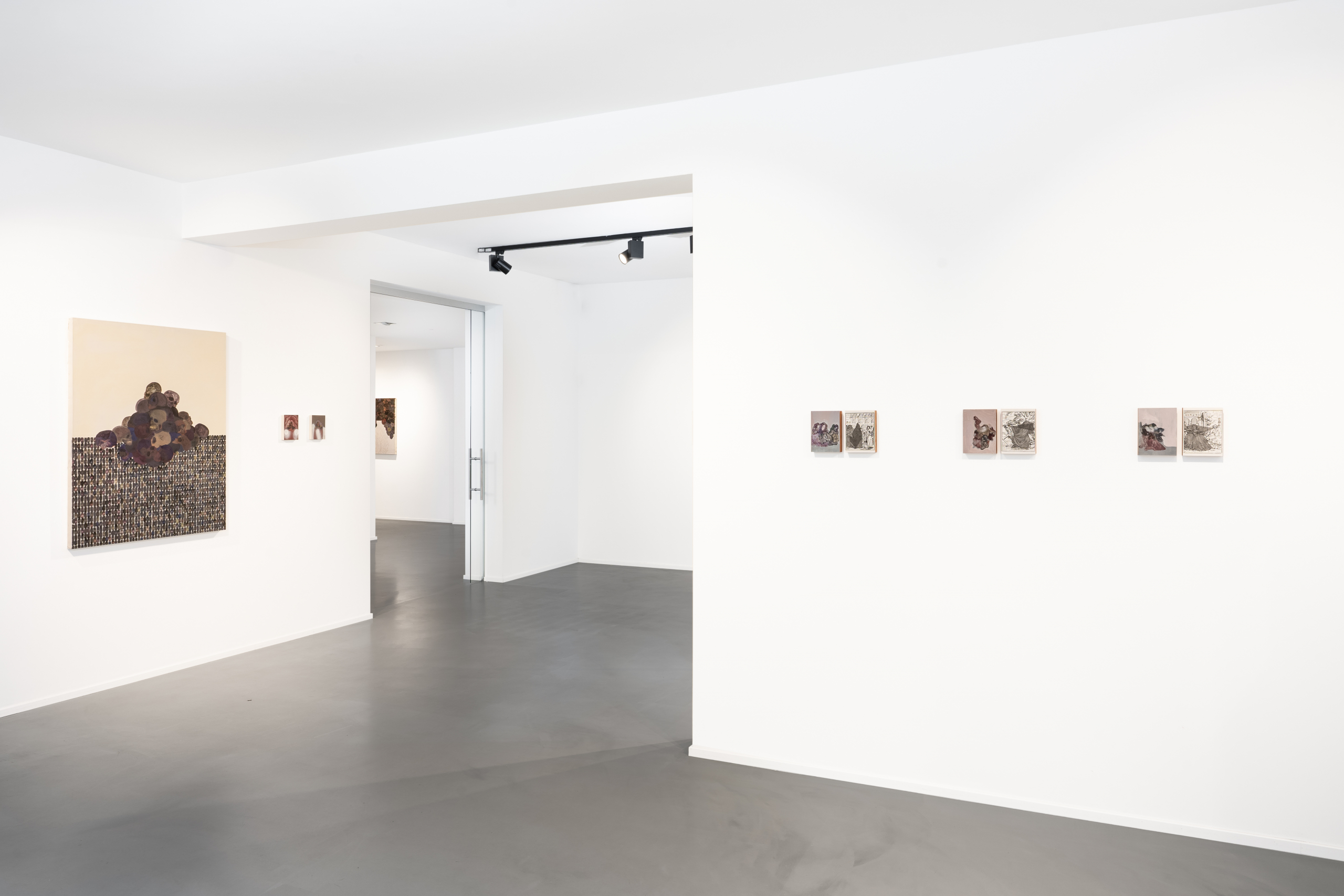 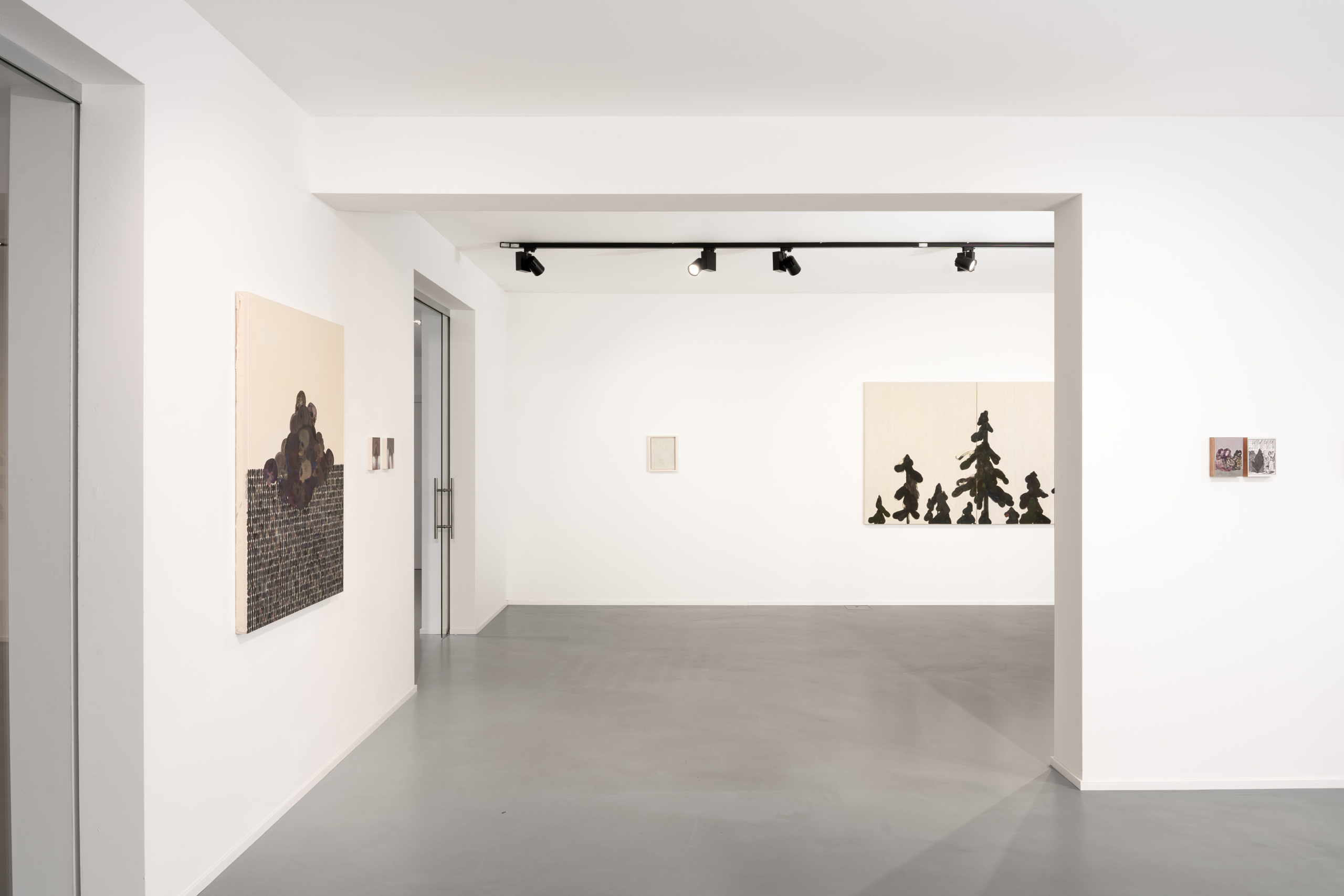 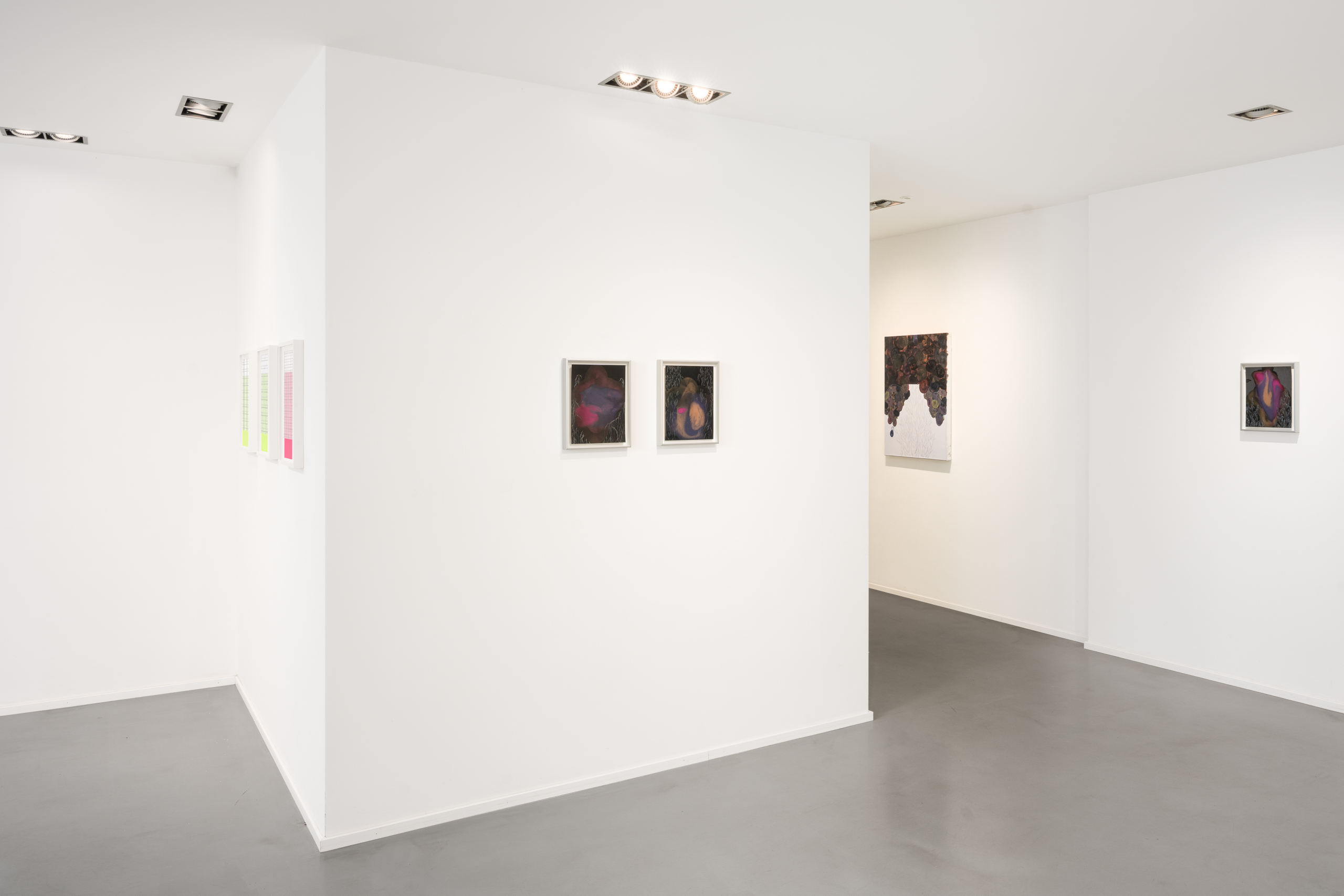 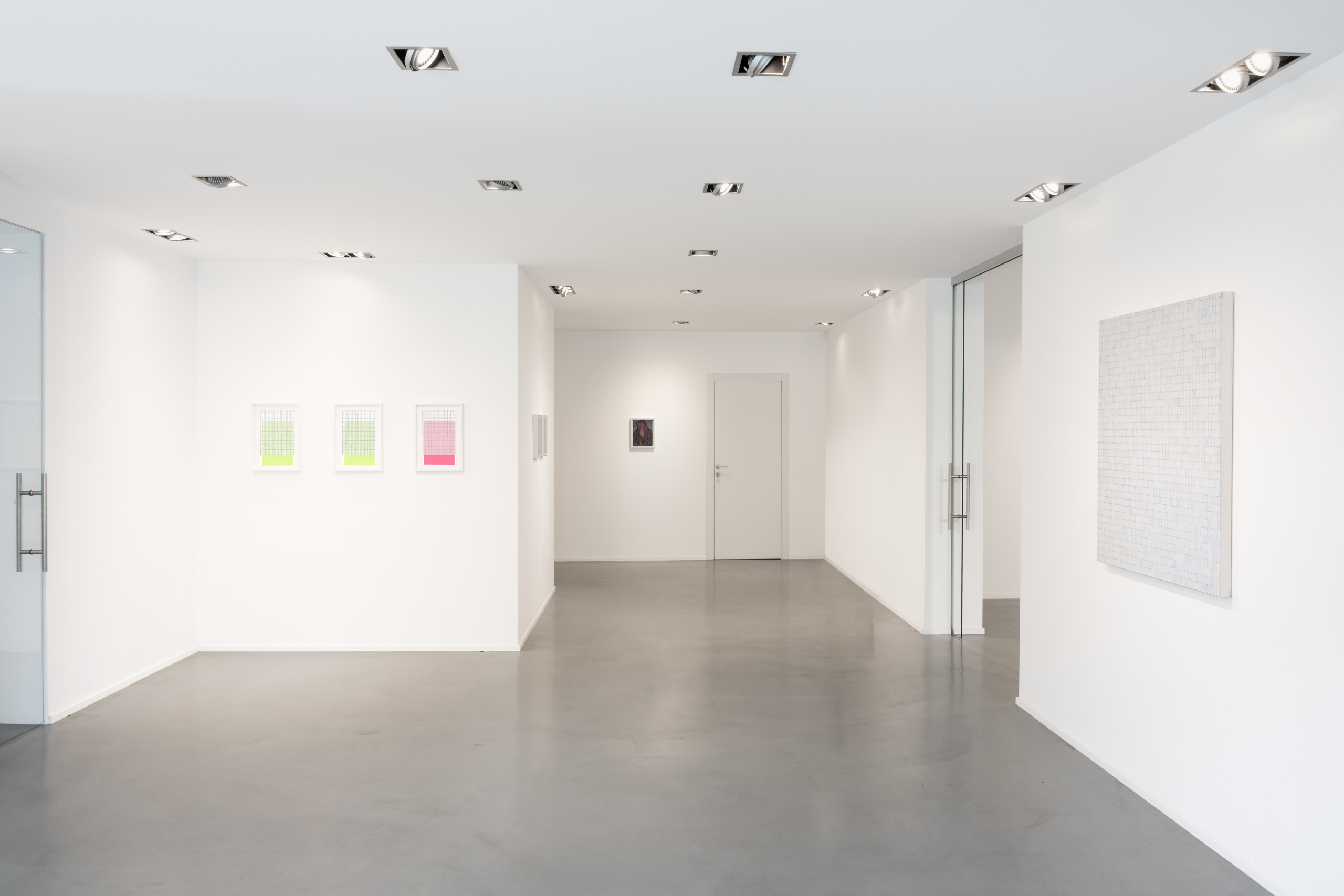