Mirabilia has been a boundless source of conversation between Luca and me since the beginning of this year, since we started this adventure with great enthusiasm and dedication. Even though I have known Moscariello’s research and methods for years, this shared experience has risen new perspectives on his work for me (and I am convinced somehow for Luca, too) as well as new points of view for observation, which have not been revealed yet.

The wish to bring these new perspectives to the surface has given birth to a creative flow, not influenced by market-driven logic or self-inflicted impositions, but granting Moscariello the great privilege to paint with outstanding creative freedom. The result is this solo exhibition, which has no retrospective or self-celebratory presumption at all, however, observers are certainly confronted with a large-scale pictorial research where colour is dominant and disputed by easily recognizable figuration and concealed abstraction.

Quoting Max Ernst, Mirabilia is therefore a “systematic disorientation”, strongly desired by the artist; it is a puzzle composed of countless fragments, a lot of chapters which only make sense if linked to each other: we are thus faced with an encyclopaedic work which embraces different moments, different places, a lot of memories, a literary world where the real world may be reflected in, and which certainly reverts to the fantastic narrations of Gianni Rodari, Italo Calvino and Georges Perec.

Like Perec, Moscariello wants to dwell on the dimension of time, intended as a fragment when you can catch the signs of a continuously changing reality. That is why he concentrates even on the most irrelevant details and constantly seeks scrupulousness, which emerges from his works. At the same time, there is no ambition to drift into the abyss of compositional mannerism. The combination of the objects (heterogeneous at first sight) on the surface of the painting is not inspired by the attention to detail, but by the awareness that visual strength can be found in surfacing, appearance, disappearance and evanescence.

That is why Moscariello does not separate his clearly figurative pieces – that have distinguished his work in the Italian artistic panorama so far – from the evidently non figurative ones. I do not deny that my statements may create a somewhat cognitive dissonance in the observers but if we make a little effort, we will easily be able to sense the artist’s necessity to remove those visibly explicit interpretative elements.

Taking his cue from the world of cinema and literature, Moscariello takes possession of the crossover technique that consists of uniting two or more different stenographies in a single narration. So, here is how Mirabilia shows up as a varied compositional universe where the only common theme is a certain and acute need of the artist to concentrate on painting, abandoning any type of rigid patterns.

As Paul Klee wrote in his Theory of form and design “a concept is not effective without its opposite”, similarly the young artist from Bologna cannot leave this statement out of consideration, on the contrary, he reinforces it referring to the mantra of the psychologist and educationalist Henri Wallon according to whom our mind is formed by couples of opposites, in a clash called generation. This concept was essential for Gianni Rodari to theorize the technique of the fantastic binomial, an extremely useful exercise “in order to move words and images”. This works if there is a certain contextual distance between two or more words. Matching these words should seem unusual in order to trigger imagination and consequently create a connection to develop narration.

In the end, this kaleidoscopic mix of apparently heterogenous situations is what Moscariello leaves us to interpret, among combinations of pop colours, situations that are constantly in precarious balance and puzzles to be solved. 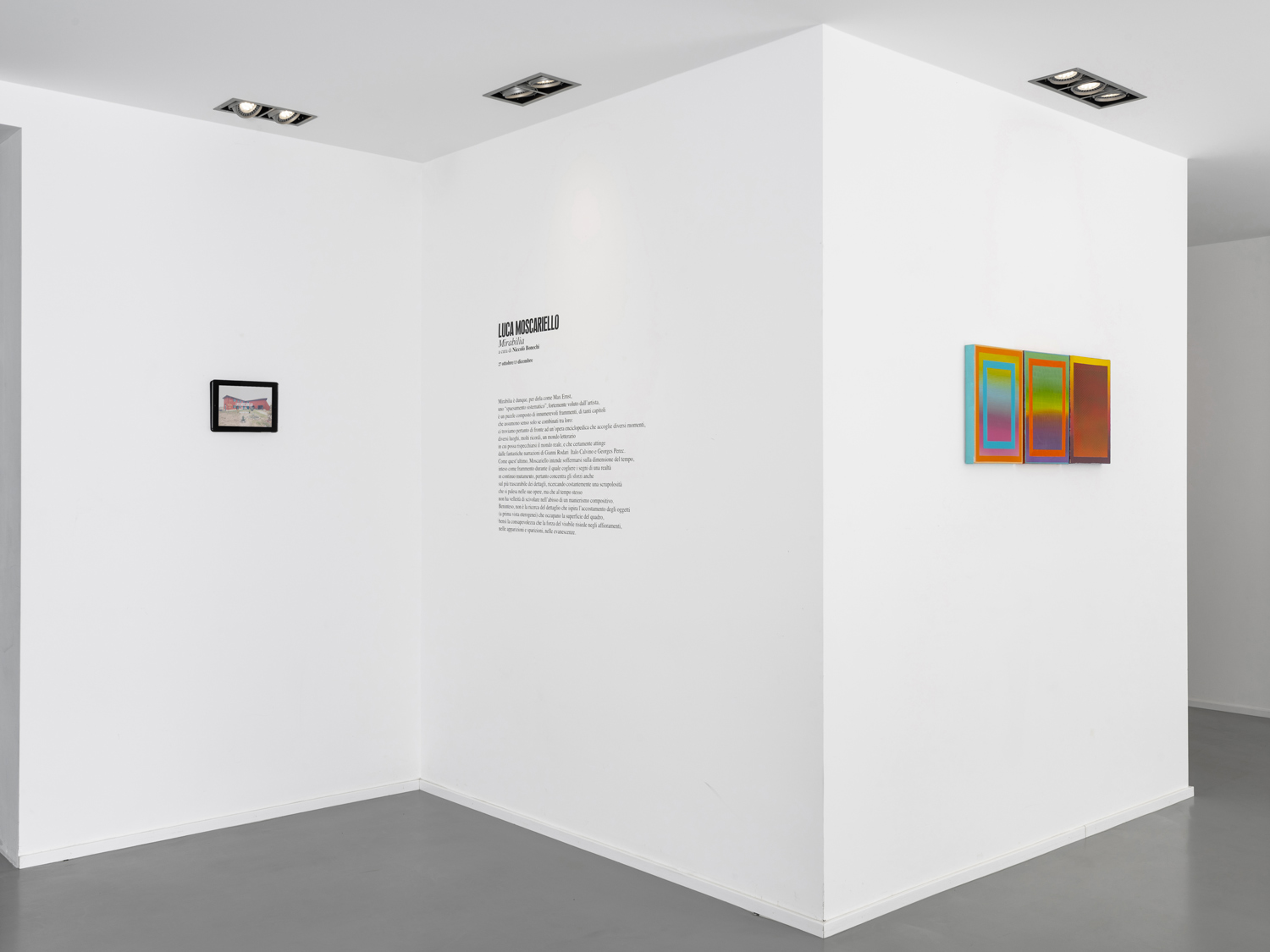 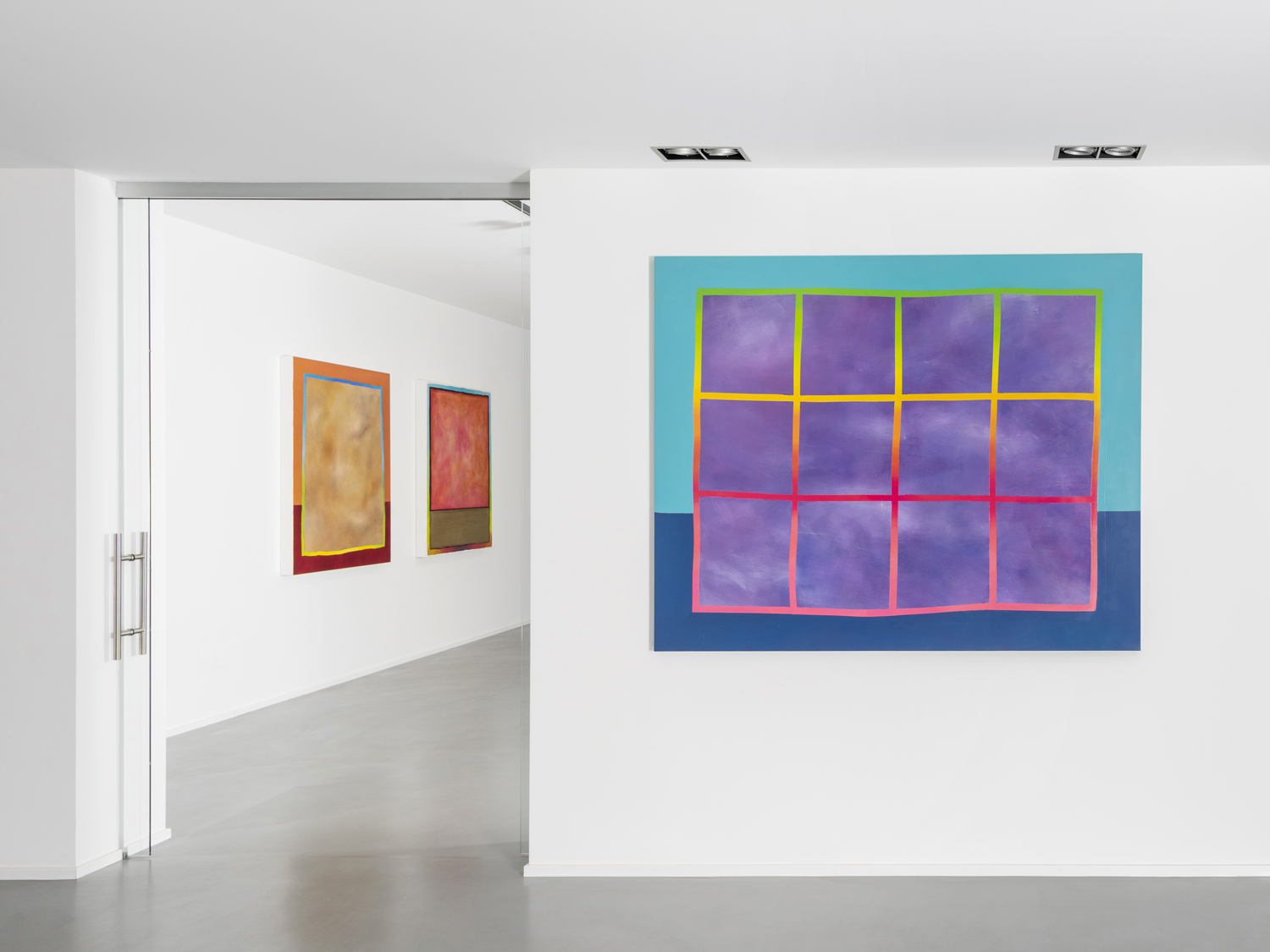 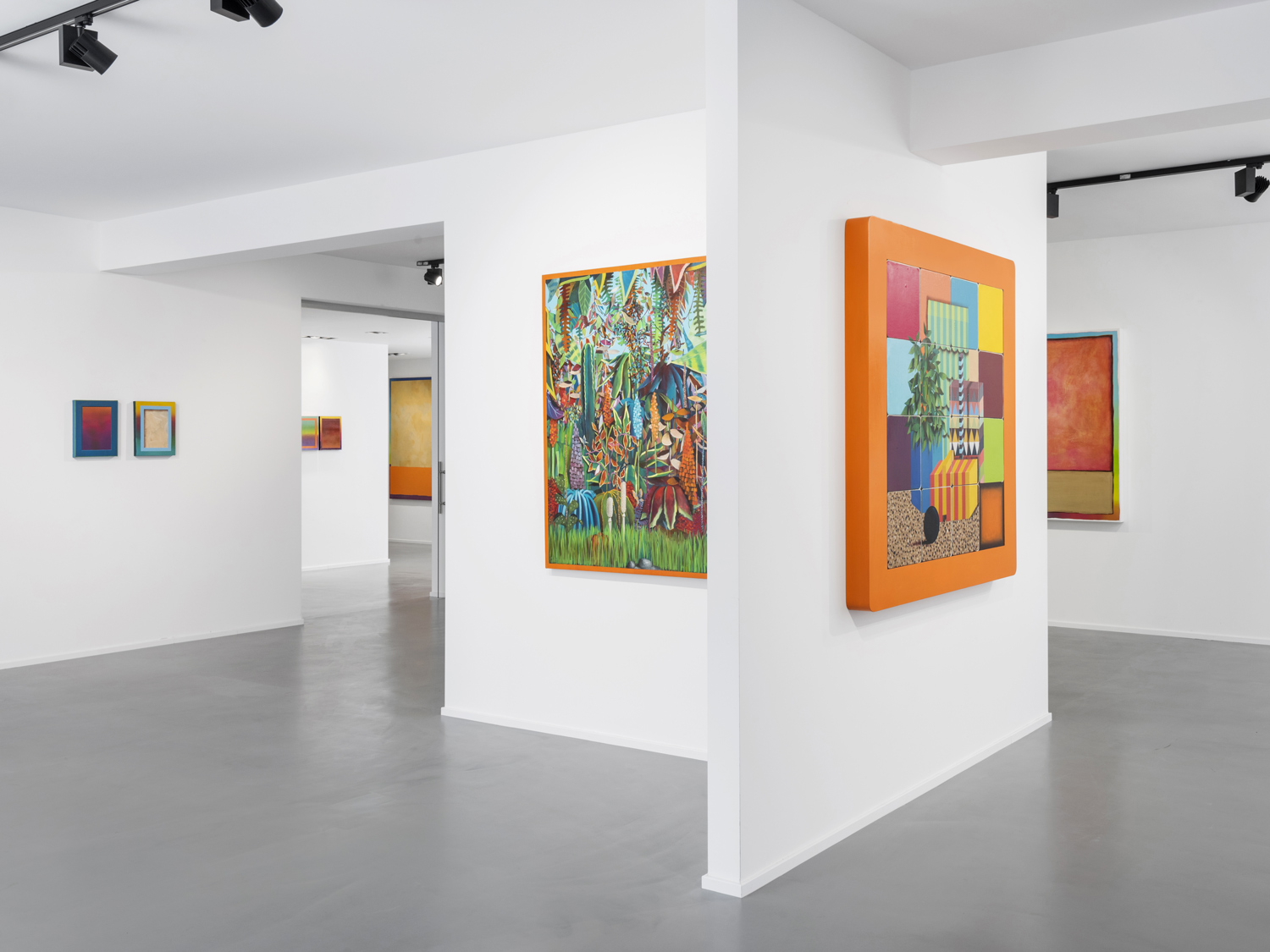 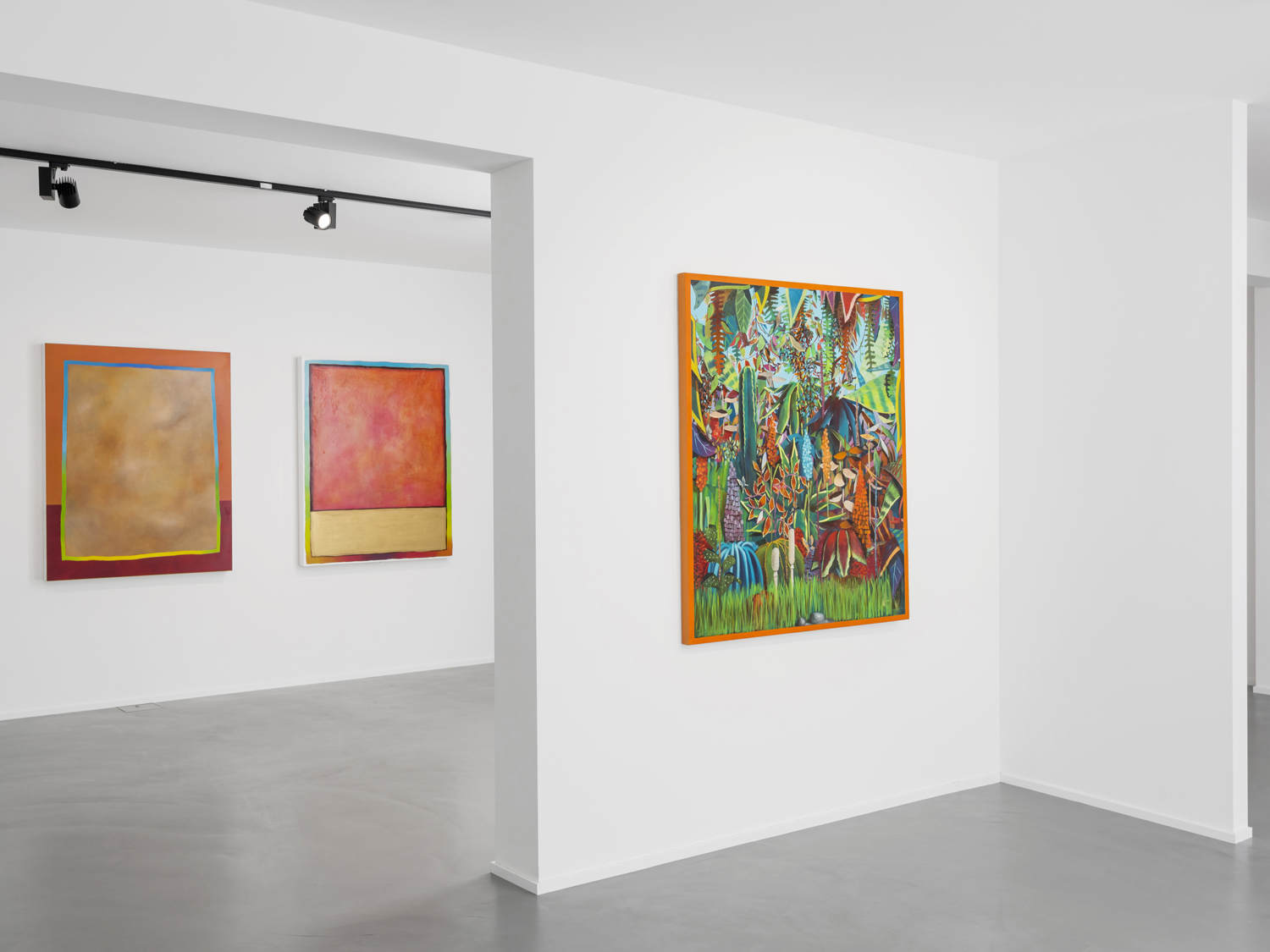 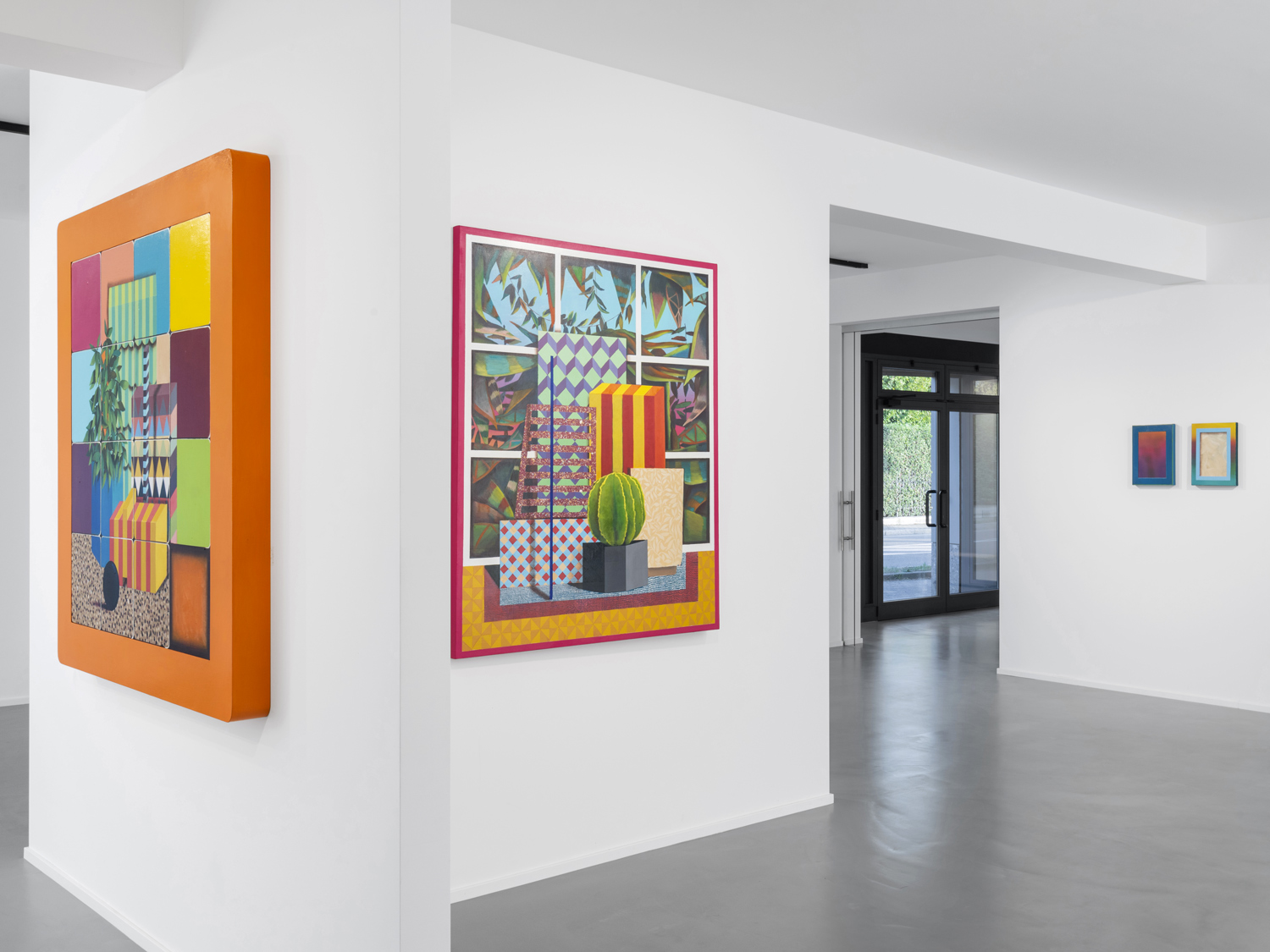