“Now, the making of a good compilation is a very subtle art.
Many dos and don’ts. This is a delicate thing”
Nick Hornby, High Fidelity

Developing a show is a delicate process, especially if the chosen artist has a substantial, complex and vivid expertise like Laurina Paperina (Rovereto, 1980). The artist displays a solo exhibition at Martina Corbetta, near Milan for the first time. MixTape shows different works: paper, cardboard and wood drawings, pop canvas, comics and pictures. These pieces have been minutely studied, “dissected” and selected from a macro world made up of little characters, cultured transpositions and creative visions from the Zio Pork Studio – where Laurina works – that were kidnapped and brought by Martina Corbetta to her gallery, as a summary of a ten-year career.

After recent exhibitions in California, an artist book publication, a group show at the Basque Region Centre for Contemporary Art and at Fabbrica del Vapore a Milano, the solo show at MIC in Faenza and the famous purchase of two pieces from the “How to kill the artist” series by Mart in Rovereto, Laurina with ironic energy gets back to work, opening the complex and animated treasure chest with her most known, sarcastic and desecrating pieces.

For MixTape the artist has been expropriated of a part of this macro-organism that never stops, because her main characters -her creations- never sleep. Telling a story starting from the main characters is like cheating at cards, like spoiling a movie. But it is not a real cheat if we already know these characters, because they already belong to our memory. The fictional characters we know have been absorbed and re-elaborated by Laurina Paperina’s hand which, with no filter and a cruel and clearly recognizable ironic mark, blends past and present in her stories. And, why not, also the future through the premonition – or desire – of the evil’s end. Starting from the end we take a step back and study a unique artistic path for a child who, aged five, had produced her first cartoon: the story of a badger, created and drawn in her time off between kindergarten and junior school. A badger as an excuse to talk about herself and her feelings. A sort of alter ego that has changed, multiplied, got angry, and grown up by becoming more clever, ironic, irreverent and funny over the years. But always with the same purpose: this alter ego wants us to smile and to reflect.

So Laurina creates a compilation – mixtapes were popular in her teenage years – where these characters are brought back to life through a set up following their own stories, from older works to the recent ones from 2015/2016. Her “friends”, her heroes and anti-heroes, all those subjects either invented or symbols of the 80s and 90s pop culture in which Laurina grew up, parade on the walls, in a continuous dialogue between thematic chaos and narrative order. Video games; movies; cartoons and animations; music… the artist has always put herself in a personal relationship with all these environments through self-portraits. (The video series How to kill Laurina Paperina is a perfect example). Characters such as her “Losers” – the super uncool Marshmallow, Shitman, or the Unicorns –, the “Braindead”, a Sponge Bob lookalike or the“Heroes” (who are actually not that heroic!) such as E.T. or Ninja Turtles, Bansky’s mice (rats) and again the legendary artists who inspired Laurina – Keith Haring, Jean Michel Basquiat, Pablo Picasso, Marina Abramovich, Gina Pane etc. – with a funny self-destructive behaviour using their own art that Laurina, mercy-less, reworks with an incessant productive rhythm. (The video animation series How to kill the artists collects hilarious episodes).

The path that Laurina Paperina develops at Martina Corbetta is funny and diverse, with new appearances such as some drawings directly painted on the gallery walls; photographs from past trips, where her irrepressible cynical and attentive eye creates a mood between a horror/splatter b movie and surreal Lynch like atmospheres; black and white drawings that recall illustrators such as Raymond Pettibon and a video from an old cathode ray tube tv. The gallery becomes a different reality: an escape to immerse yourself in and smile a little. 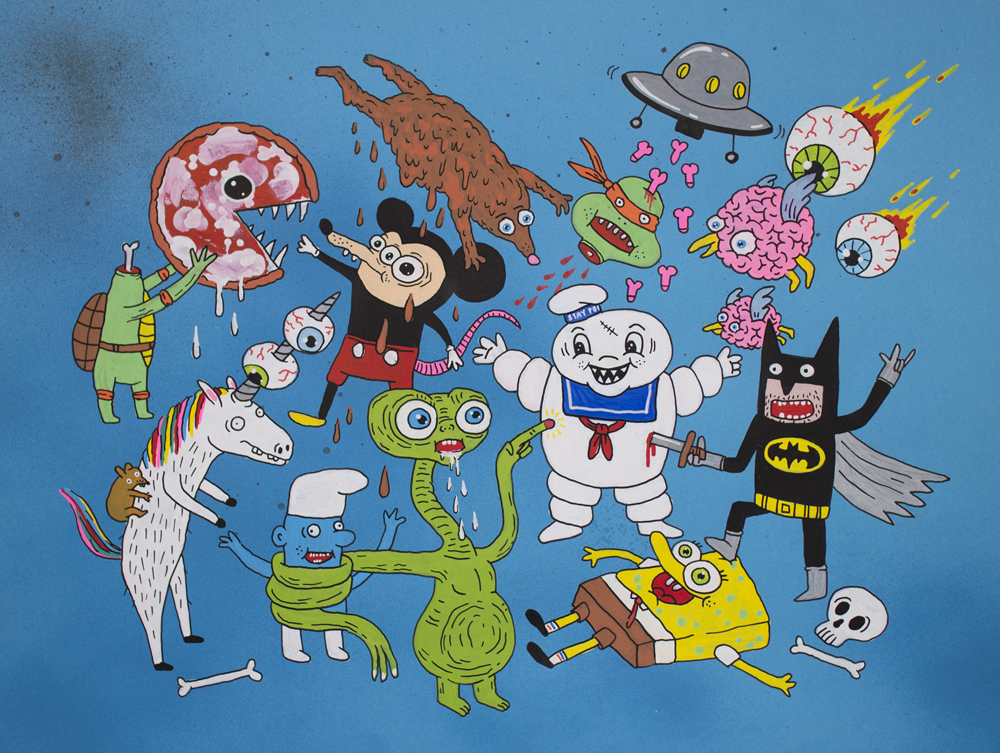